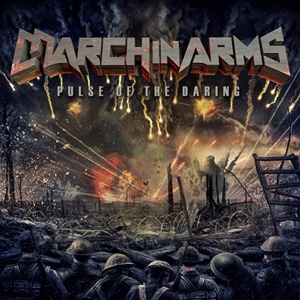 Worry sets in when it can take a little time to pool all the proper resources together to complete a record. Especially if the material takes two years from completion to finally hit the streets – as is the case here for March in Arms. Wanting to put their all in every aspect of the album, Pulse of the Daring benefits from this meticulous self-scrutiny – filled with themes of combat horrors and the human spirit through them, as well as the heroism that can come about through the battles.

The five-piece unit contains three guitarists – setting up interesting mixtures of power/traditional-oriented riffing and interplay with thrash and progressive aspects when called for. A lot of times the chord progressions, gallops, and transitions galvanize the rhythm section work – “1914” opening with charging Iced Earth-like mechanics and the supplementary vocal harmonies during the chorus plus violin parts from guest Esther Nissen adding another haunting/exciting twist to make this an instant classic. Guitarist Ryan Knutson doubles as lead vocalist – his grit and melodies outstanding, intertwining a mix of modern hard rock smoothness (think Volbeat) against natural metal pipes, up to the challenge in the triplet-fueled “Thunderbolt” as much as the more mid-tempo, 80’s Queensrÿche-ish title track framework. Additional narrative / war scene action keeps the lyrical content focused and sharp – you get the sense that these musicians thought long and hard about matching up the atmosphere and feel on both fronts track to track. Best cuts to connect headbanging euphoria include the Judas Priest/Accept-like “No Years Resolution” and the closer “Not for Nothing” filled to the brim with addictive twin guitar melodies, another calm violin-led mid-section, and a brilliant Orden Ogan-esque choir movement towards the conclusion.

Three of the members also play in a metalcore/thrash act Nodes of Ranvier – hopefully they will continue to balance out both bands, as March in Arms is another strong US power metal group worth your attention and time if you love the genre. Pulse of the Daring is well-worth the wait, fueling great expectations when the next release comes to fruition.