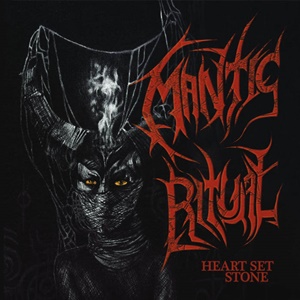 Back for a second go around after releasing their Executioner debut album in 2009 for Nuclear Blast and touring with Rotting Christ, Destruction, and Enforcer among others, Heart Set Stone is a six-song EP split down the middle in the original/ cover camps for Mantic Ritual. Three-fourths of the main lineup resurrected after spreading their wings in acts like Gygax and Warbringer over the 2010’s – as current Warbringer drummer Carlos Cruz fills out the quartet. This is an ideal primer for reintroducing the potent thrash with enhanced melodic, darker, and traditional influences pushed forth, proving these gentlemen still possess chops, finesse, plus urgency in these tracks.

When assessing the newer songs, there’s a primitive nature to the main riffs/accents from guitarist/vocalist Dan Wetmore and fellow guitarist Jeff Potts that makes “Crusader” an instant appealer – the stop/start action giving some Maiden-esque gallops, while the solo work intertwines bluesy textures plus bends, twists, and shredding tasty angles. On the other side of the spectrum, the title track is the longest cut at 5:25, showcasing a heads-down, thunderous charge, as well as impassioned vocals from Dan that prove Mantic Ritual can still ramp things up to thrash with the best in the business. When you look at the covers, you’ll get G.B.H. with “Race Against Time”, Mercyful Fate for “Black Funeral” and Razor’s “Cross Me Fool” – running the gamut across punk, classic metal, and speed lines. While this scribe tends to enjoy artists that usually think outside conventional lines for this type of thing, in the hands of this group, all three tributes align with their outlook on heavy music – hopefully turning some younger followers onto these early contributors to the underground movement.

Welcome back Mantic Ritual – they should continue to regain ground as the live marketplace whips itself back into shape. This is an ideal quick fix to appease the faithful until the next full-length comes out.