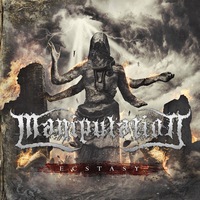 Despite the globalization of the world, some countries still get the same old stereotypes. Think of Sweden and you think of (melodic) death metal, and when it comes to Poland, one tends to associate with brutal death metal. The traditional Polish heavy-weights like Decapitated, Vader, and Behemoth come to mind – which is why Manipulation’s more ‘modern’ approach to death metal seems a bit more surprising with the sheer number of bands that come from said country that try their hardest to simply emulate the masters.

Fully describing Manipulation takes a bit more work than one might expect. There are a number of different things going on within the record, but it does seem to encompass a more modern and sleek feel. Even some of the titles, such as the rather blunt “Burn Motherfuckers” and “Bad Boy” keep this in mind. But fear not, this isn’t a core-sounding record in that regard. Take a track like “Lifetime,” for example. There’s elements of grind (complete with full-on blastbeats) to open the song, some chugging groove, then it veers into some almost-thrash territory until igniting a melodic solo. The almost unpredictability of it all is refreshing, as the songs don’t always move into directions that you would come to expect. The title track ends things on a particularly odd note, in which the band drops the death metal context completely at times, engaging in clean/spoken vocals and cleaner guitars before more familiar barks and downtuned riffs come in to finish the track.

Some interesting twists and turns await those who check out Ecstasy. While a few of them don’t work out quite as nicely as the rest, the band comes off as willing to take some risks – something some bands are just not capable of (hence the sea of old school death metal bands). There’s some potential that could prove quite effective next time around if the band continues to push in this direction.