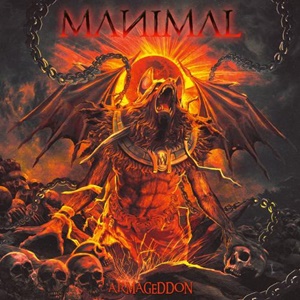 Establishing a foothold in the heavy/power metal scene since forming twenty years ago, Manimal continues to uphold a well-established sound on their fourth album release Armageddon. The quartet executes proper mechanics through catchy riff/vocal hook combinations, positioning the tempos and songwriting in such a manner that most ardent followers of acts like Judas Priest, Queensrÿche, King Diamond, and Primal Fear will find plenty to savor in these ten latest tracks.

Instantly the guitar work of Henrik Stenroos catches the ears in a driving, infectious way – be it semi-staccato with supplementary pulsating rhythms as support during the title track, or in an uplifting, harmonious angle a la Judas Priest circa Painkiller-era for “Evil Soul”. The rhythm section duties for bassist Kenny Boufadene and drummer André Holmqvist capture the groove and power of the ideas on hand, as well as adding a bit of sophistication in small windows of spotlight during the opening sequence of the seductive “Slaves of Babylon” or street-level anthem “Chains of Fury”. It also helps that vocalist Samuel Nyman has the impressive range to hit falsettos mere mortals never try, while executing his lower/mid-range abilities in a convincing metallic atmosphere. All hail his prime Halford-esque upper screams during “Master of Pain”, while you get a bit more of his personality and versatility during the progressive closer “The Evitable End” – the embellished keyboards and pulsating bass heightening the dynamic movements. The winged assassin makes a return visit as a running theme – this time in the eyes of artist Stan-W Decker, surrounded by skulls and chains.

Manimal are not necessarily the type of European power metal band you would think of in the sense of Helloween, Gamma Ray, or Stratovarius – the riffing and vocals a bit heavier with more bite and anger fueling the proceedings. Armageddon positions the band in their preferred lane of late 80’s/early 90’s heavy metal that wears its influences proudly, adding the occasional modern twist to keep the listeners appeased from being too formula driven.

Manimal – All About Honesty 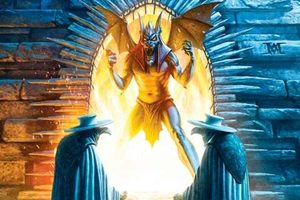 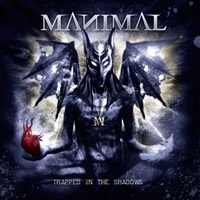