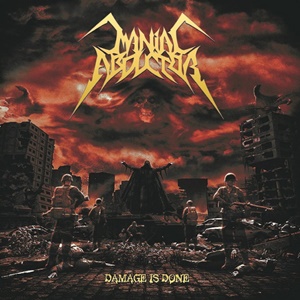 Previously under the microscope for their debut album Casualties of Casualty back in the May 2019 Rapid Fire column, Maniac Abductor return for the second full-length Damage Is Done. A quintet well-versed in the art of thrash, these musicians float between influences from the North American and European scenes. Listeners can expect everything from razor sharp transitions, stop/start action, crunchy riffs and rhythms, gang background vocal enhancement, plus a bitter, vicious vocal attack over the course of these eight tracks that showcase versatility and proper knowledge of the genre at hand.

The semi-power punch and galloping nature guitarists Jesse Elo and Saku Tauru takes on aspects of Heathen, Artillery, and Coroner as you process the main hooks and slight twisted shifts from part to part – “Odd Man Out” an early significant cut of note showcasing intuitive interplay and killer, circular lead break action. The songwriting often has this heads-down tenacity with smart, catchy hooks in all the right verse/chorus angles – which is where the key gang vocal support punctuates specific sequences, or the mid-tempo instrumental break provides that extra headbanging movement, “Human Greed” exemplifying that early Metallica/Exodus atmosphere. While most of the songs roll by at a radio friendly three to five-minute clip, closer “Ghost of the Killing Fields” at 6:28 allows Maniac Abductor to develop more of their melodic outreaches, including a very subdued instrumental opening plus a thoroughly entertaining mid-section that’s more Maiden-esque in its progressive aspects between the driving rhythm section components and rich twin guitar passages. The occasional hyper-speed snare hits from drummer Jesse Räsänen that appear in sections of the title track or “Endless War” give the band a bit of that modern angst against the throwback thrash platform – while the production values are crisp and clear, just as most listeners prefer when taking in this music.

A sense of natural maturation took place between records that proves Maniac Abductor want to elevate their style to more musicianship enhanced heights with Damage Is Done. As such, this material will tear limbs, crush skulls, and keep you coming back for more.