Manacle – No Fear to Persevere (No Remorse Records) 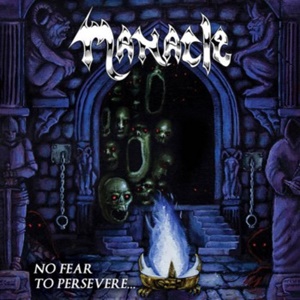 The cool factor of nostalgia can wane quickly if you don’t have your head and heart in the right place. Heavy metal in its purest form ebbs and flows like the tide – newcomers looking for younger acts to latch onto, while old-timers yearn for outfits that remind them of the Maiden/Priest glory days. Hailing from Toronto, Canada and plying their trade since 2013, Manacle took their time refining their craft through rehearsal/live demo offerings, setting the stage for this debut full-length No Fear to Persevere. All about shackles, chains, studs, and leather, you know through these six songs that this band is all about heads down, primal heavy metal featuring high-pitched melodies, steady rhythms, and potent bass/drum action.

What’s immediately noticeable is the incredible screams and confident upper echelon melodies from singer Kevin Pereira. It’s evident within the first two minutes of “Fight for Your Life” that he possesses tendencies that put him in the Savage Grace/ Agent Steel mold, providing that mountain high against the shape-shifting instrumental section on the back half that is more Omen-esque. “Tears of Wrath” opens with a spirited double kick drum sequence out of Miguel Negron before settling into another mid-tempo power effort, the gang-oriented chorus sure to go down a storm live. Considering five of the six songs align in that under five-minute benchmark, Manacle make sure to pack as much variation for dynamics in the cuts – unafraid to bring the mood down to cleaner reference points or ramp up the march-like proceedings in an Ozzy meets Queensrÿche fashion for another highlight “Live Fast, Die Fast”. Gaining proper mixing/mastering support from Enforcer mainman Olof Wikstrand, the only minor complaint is the rather short album-length at under 29 minutes – but if it worked for Reign in Blood, one supposes that leaving them wanting more than exhausting their aural experiences isn’t that bad of a feeling.

No Fear to Persevere gives speedy traditional metal maniacs a new record to devour – and hopefully will help Manacle develop into another reliable entity from the Great White North.