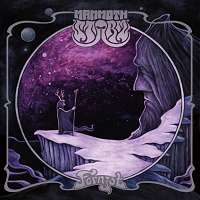 Not the first Draconian side-project to be released by Napalm (that would be Shadowgarden), Mammoth Storm feature Draconian guitarist Daniel Arvidsson in its ranks, showing that perhaps the Austrian label likes the heralded Goth crew enough to grant them release of their “fun-time” avenues. Mammoth Storm, like any off-shoot, bears no resemblance to Arvidsson’s main act, rather, playing a hearty, beefy brand of quasi-stoner doom on Fornjot.

One doesn’t have to be neurosurgeon to deduce the riffs found on Fornjot (the band’s debut) are huge and lumbering, which frankly, is all one needs to do in order to cut it these days, apparently. The spacing and repetition here are what propels the album. Never quite in a rush to move over to a transition, the trio (rounded out by Emil Ahlman on drums and organ; Christer Ström on guitars), take their sweet ‘ole time in working in said burly riffs, some of which recall prime-Candlemass, particularly on the album’s title track, which if the monk robed Messiah Marcolin was around, would be a world-beating number. Instead, Arvidsson’s vocal approach barely differs from his American contemporaries; he’s got the whole “barking in key” thing down, which is appropriate. Nearly every vocalist playing this style in North America fancies that route, too. (Arvidsson does manage to test out a decipherable clean vocal on “Horns of Jura.”)

Outside of the mounds of meat and rare organ churn, Fornjot has little to offer. The doom realm is saturated with like-minded bands, many of whom benefit simply because of their amplifier and guitar setup, something that might very well be the case for Mammoth Storm. In turn, Fornjot may only satisfy for its massive (or “mammoth”) guitar tone, a tone that really is heavier than a heavy thing.