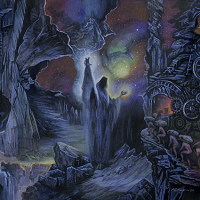 The review cycle often predicates hearing something similar, or even the same thing over and over again. Our ears might be experienced (and incredibly biased towards certain outfits), but they’re hard to fool, so after wrapping up a review of All Pigs Must Die’s new Nothing Violates This Nature, Mammoth Grinder’s first album in four years, Underworlds was given a spin. If it wasn’t a case of deja vu all over again, then Ryan Braun is an honorable man. (Is this first time a baseball reference has graced this site? Probably.)

Hailing from Austin, Texas, Mammoth Grinder don’t go the grind route as their name would suggest. Instead, they play a combustible brand of death-d-beat-crust that given the current marketplace, is very vanilla. It’s like, don’t these guys know what else is going on? Perhaps they do, perhaps they don’t, but it shouldn’t stop cuts like “Revenge” and the death metal-infused “Cogs in the Machine” from going off the rail(z). And at a crisp 28-minute clip, the album wraps rather quickly, giving one less time to pinpoint how Mammoth Grinder sound like 85 other bands going at the moment.

Worse part is that you get the sense that all of this like-minded bands are scraping and clawing for an increasingly smaller piece of the pie. They have themselves to blame for essentially toppling over each other by sounding alike.