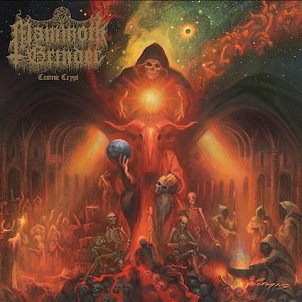 Some credible dudes hold it down in Mammoth Grinder: Power Trip bassist Chris Ulsh, current Iron Reagan and former Darkest Hour drummer Ryan Parrish and his IR bandmate Mark Bronzino, who handles guitars. Mammoth Grinder, thankfully, sound nothing like any of their current or previous bands, hauling out a rather decisive bout of classic death metal merged with the tenacity and rawness of crust punk and d-beat. The resultant Cosmic Crypt (their first album since 2013’s Underworlds) is a true demolition hammer.

Give it up for Bronzino’s guitar tone, which, for lack of a better term, is the definition of unbridled savagery. He’s often in full-blitz mode, pedaling visceral Floridian riffs with the break-neck speed of Stockholm. It comes together pretty quickly on some of these tunes, in particular, “Blazing Burst,” which would qualify for an Autopsy-on-Entombed song if it had to. The churn-and-burn that sets off “Divine Loss” eventually bubbles into more blasting, while the doom-rattle of “Human is Obsolete” finds the trio rattling around in vintage d-beat mode, all the while Ulsh’s vocals are draped in the necessary amount of reverb. Throwback city.

Indeed while Cosmic Crypt is suitably reckless and an audio terror, the manner in which Mammoth Grinder steers these songs shows off a level of detail and craftsmanship not often found in this terrain. While a lot of what Mammoth Grinder does rings familiar, they are, without question, searing, throttling and sonically propulsive.