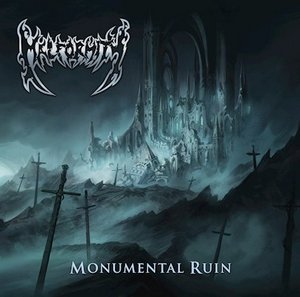 Another one of those ‘really long time in the making’ type of albums, Malformity initially got together back in 1991 and then called it quits a few years later. They reformed in 2014 and popped out some EPs, but Monumental Ruin represents the band’s first full-length effort – one that has now been 30 years in the making.

Monumental Ruin is more or less your rollicking and stomping traditional death metal release. Old school in the sense that it’s more about writing to the song than just tossing in technicality, but it also doesn’t deliberately tip its hat to any one particular style of death (say Swedish or Floridian) instead delivering a solid mix. What’s also nice is the more modern, hefty production that gives the album some weight to toss around and keeps things clear, yet dirty enough in some regards. In addition to the death metal inspirations, some light doom can also be found when the band slows down the tempos (see “False Dichotomy”) that works great with some rolling, mid-tempo grooves. The band can hit the quicker stuff too, but pleasantly doesn’t rely upon it to do the heavy lifting – again, the focus is definitely on crafting songs and adding the proper dynamics so that a song like “Perverse Apotheosis” can charge forward with faster tempos and blasts, but they can drop speeds right down and provide some rumbling mid-tempo with some catchy hooks and grooves to sink in just as effectively.

Malformity isn’t doing anything out of the ordinary, but they are doing death metal just the way it should be done. Solid melodies and solos without compromising the energy, effective tempo and dynamic shifts, and plenty of rage/aggression to back it all up. Enjoyable material for sure. Monumental Ruin is a fertile starting point for the act, even if it did take quite some time in development.