Malamorte – Hell for All (Rockshots Records) 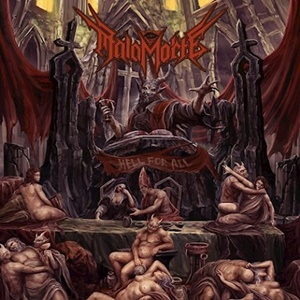 A side project for Lord Vampyr – vocalist of the same namesake band with six albums – Malamorte explores more of a straightforward heavy metal angle compared to his industrial, gothic, and black leanings. The duo consists of Lord handling vocals, guitars and keyboards plus SK as second guitarist, bassist, and drum programming – they’ve released an EP and two other albums in a relatively scant 4 years, arriving at the third record Hell for All. As a newbie to Malamorte, it appears that within these ten tracks the band want to explore more of their old school power and thrash affinities on this release – placing emphasis on simple yet catchy hook lines and melodies.

Lord Vampyr as a singer doesn’t necessarily have the widest range where he will ascend to heights of Halford screams or Dickinson level air raid siren calls. As you take in the mid-tempo anthem “Holy or Unholy”, you get the sense that he has this Glenn Danzig meets lower-range King Diamond wail, befitting a throwback 80’s/early 90’s delivery. Certain guitar riffs possess biting tenacity and extra nuances of flair for excitement – “The Worshippers of Evil” a second half head turner, while “Antichrist” brings a lot of that Judas Priest meets thrash appeal. It’s obvious that Beelzebub, the prince of darkness, gains the lion’s share of word content (titles like “Satan’s Slave” and “Warriors of Hell” aren’t dead enough takeaways) – keeping Malamorte in league to strike at the hearts of evil.

Problem is, Hell for All succumbs to sub-standard drum programming aspects where a human drummer would have served so much better – and the choruses are juvenile to the point of utter annoyance (“Holy or Unholy” the worst offender). Which is a shame, as Lord and SK can deliver some flashy lead breaks and pen the occasional catchy musical hook or two – it’s just not up to the level that they mentors like Mercyful Fate, early Slayer, and Judas Priest delivered consistently. Back to the drawing board.