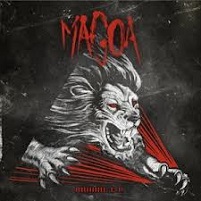 For starters, hats off to Sybreed, who are probably enjoying a cross-promotional buzz beyond their wildest dreams thanks to a contestant performing one of their songs on France’s Got Talent. In spite of the audience’s surprised reaction, it speaks to the digestible nature of cyber metal – the songs are always there, right up front, and vocally, there’s a degree of clarity found within the well-placed rage. Sleek stuff, too. Quite the shame the fine young lady didn’t make it to the next round.

France’s Magoa happened to have partaken in a round of touring with the aforementioned Sybreed after the release of their 2011 Swallow the Earthdebut. Suitably, the Frenchmen parlay nearly the identical style of brash cyber metal, drawing instant comparisons to not only Sybreed, but style frontrunners Mnemic, who are probably starting to look over their shoulders. Going down the line on the band’s six-song Animal EP, there’s the necessary amount of staccato bashing (“Animal”), big-time arena choruses (“A Thousand Lives” and “Sharks”), as well as futuristic soundscapes (“Enemy”) are in tow, heavy enough to get a look from the extreme metal crowd, but light and airy enough to get passes on pop metal.

The six-song proportion of Animal is what makes it go, for with mechanized, highly-glossed metal, bands oftentimes run the risk of being too pristine and lean. Beyond that, Magoa sounds pretty comfortable in their own skin, even if it’s the same one being worn by other bands, who are fortunate enough to have a nice looking gal sing one of their songs on network television.