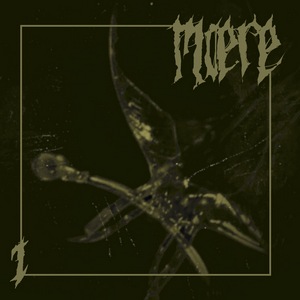 With I as the title, this is the first output from the German act Mære, who feature in the their ranks some ex-members of Ingurgitating Oblivion. But don’t expect a tech-fest, as Mære is one of those skrony, dissonant black/death acts that instead focus on darker riffing and atmosphere instead of showing off their technical wizardry.

A brief 27-minute introduction is what I entails, though with this sort of material a shorter runtime is best as it allows the band to go without compromise. So after an unsettling introductory track, the swirl of dissonance begins. While it doesn’t really go and remake the mold, this first offering does effectively show that Mære is quite competent when it comes to execution. That bleak, hopeless tone that many in this particular style strive for has been employed well here, and even allows for some breaks into groove (see “I, descend”) without losing that feeling of suffocating darkness. In fact, many of these sections are damn heavy, and resonance further with the listener in providing a sense of isolation. That said, some other moments go all out in their black/death glory, cranking up the drums and riffs – it serves its purpose for those few instances but the focus is quite surely on the dissonant and ‘lurking shadows’ vibes.

There’s a lot of promise in Mære’s first attempt. It’s short and to the point, but still quite effective in conjuring a sense of darkness and foreboding. Those looking for the next worthwhile take on the Immolation/Morbid Angel formula will find I to be worth an investigation. Let’s see where they go as they continue to stretch themselves further into the darkness.