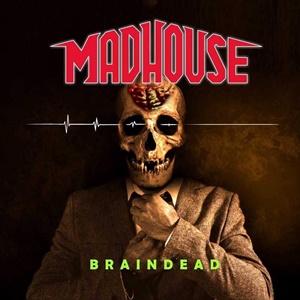 We’ve heard the story many times in heavy metal – act originally produces demo tapes in the 80’s, breaks up shortly thereafter, and resurrects themselves decades later to hopefully gain more traction in a more fertile and accepting environment. Madhouse hail from Hamburg, Germany – a heavy metal band that executes a style that’s on the fence with power and thrash nuances, with four of the five members still around from their two 80’s demo releases. Latest singer Didi Shark joined in 2016 – and the band have arrived at their second full-length since resurrection with Braindead. And through numerous passes, the eleven songs feature plenty of catchy riffs, potent choruses, and performances that rival many heroes of the European scene past and present.

You can expect songs with stirring, twin guitar harmonies and marching, cultural segments that make you think of Accept meets Iron Maiden for “Knights of Avalon” or slicing/dicing catchy anthems with exhilarating leads and upper echelon energy plus potent, commanding vocal melodies which opener “Break the Ice” delivers. Old school passion comes through on many musical hooks that guitarists Carsten Krekow and Thomas Gamlien unleash, the type of twin circular licks that make “Never Say Die” a Madhouse staple, obviously penetrating those who love Thin Lizzy and early Iron Maiden with a lead break that is more Teutonic as it unfolds with those Helloween-ish runs. Didi as a vocalist can have some acquired quirks to handle – he will go for the passionate shriek at times that isn’t necessarily note perfect – but he has that metal to the bone voice (think Alexx Stahl of Bonfire) that makes “Save Your Soul” and the highway burning “Oscar” fun to consume and return to. It’s like Madhouse bridge themselves between their preferred Teutonic heritage but also inject some of the current feel and power aspects that make Primal Fear and Hammerfall important to the current generation of metalheads.

If there’s a slight disappointment, it’s in the cover art – a skull-man in a suit seems quite generic and not as enticing as the contents of the record deliver. Nonetheless, Braindead should get those fists high, the heads banging, the vocal cords warmed up for unison chanting, and become a heavy metal staple for the hordes who crave traditional heavy metal of the anthem and mostly up-tempo variety.