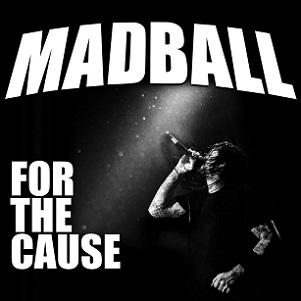 Bands often speak of doing it “since they were kids.” Madball’s Freddy Cricien literally has been doing it since he was a kid — 12, in fact, when he would join his half-brother Roger Miret during Agnostic Front shows. It’s a hardcore upbringing that is unequaled, helping develop Madball into one of the scene’s standard-bearers. For the Cause, their ninth studio album wasn’t without its bumps, namely the departure of long-time guitarist Brian “Mitts” Daniels, who left the band last year. In his place, however, is original guitarist Matt Henderson, whose riff tactics are part-and-parcel with Madball’s swinging (literally) metallic hardcore sound. The end result is one of the band’s best in years.

Engaged in largely the same crisp, throttling production arena that Agnostic Front has employed in recent memory (European metal maestro Tue Madsen handles the mix and mastering), For the Cause easily puffs its chest out with street-ready rhythms and Cricien’s biting vocal approach. Cricien remains one of the scene’s consummate vocalists — capable of mixing it up in the punk field and relaying sing-along choruses, as so found on “Rev Up,” “Old Fashioned” and “Lone Wolf.” The venerable Ice-T joins in on “Evil Ways,” while the mosh-ready “The Fog” is aided by Tim Timebomb and Steve Whale.

As so properly outlined in their press materials, Madball’s work ethic and dedication to the scene is second to none. It’s a career-long pursuit that has kept them atop the New York hardcore heap. With For the Cause, Madball simply retains their position as one of the scene’s most venerable bands.