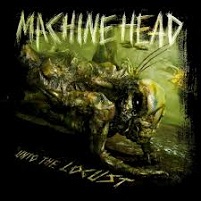 This very website you are so kindly reading was named after a Machine Head song back in 1998, so apparently, Machine Head isn’t taken lightly around here. We’d be singing

a different tune if Rob Flynn and the boys were still enamored with dumbass rap metal like they were from 1999 to 2001, but they’re not, as the gradual pure metal-addled upswing from 2003’s Through the Ashes of Empires and 2007’s breakout The Blackening has given MH a new lease on life and a seat atop the American metal scrap heap. With Unto the Locust, the band is able to hold serve.

here, which isn’t a problem considering MH has gotten into the habit of writing really long songs. Because the band is so riff-reliant, there’s a lot of girth to these winding compositions. It’s almost like MH packs epics within epics, if that makes any sense. Nevertheless, there’s a truckload of good ideas, starting with “I Am Hell (Sonata in C#)” where the band keeps it thrashy (Flynn’s rapid-fire vocals can still get annoying, though) and technical. Even when the band dips into a classical portion, it’s a seamless transition going into Maiden-like harmonies.

of the lot, boasted by a shimmering and eerie opening riff and fiery chorus from Flynn. Once again, MH finds the soft spot in the song to settle things down for some nifty guitar doodling. “This Is the End” takes on some more classical bits (which are quite memorable), only for it to be off to the thrash races again, while the children’s choir opening “Who We Are” is a bold move, something that is now right in the band’s wheelhouse, ending up as a fine closing to the album.

severely lost its plot at the end of the 90’s, but the trio ofThrough the Ashes of Empires, The Blackening and now Unto the Locust make it one of the best run of albums in recent American metal history. In fact, there’s no veteran band of this stature that is this reliable, making Flynn’s sillyrap

spots and bleached-blonde hair a thing of the past. Machine Head is now an American metal institution. Who would have thunk it ten years ago?