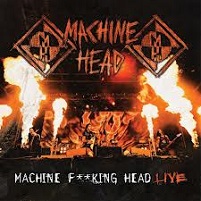 Free agents now that their contract with longtime label Roadrunner has expired, Bay Area modern metal kings Machine Head are signaling the end of an era with an obligatory live set/contractual filler, Machine F**king Head Live. With big organizational changes afoot in the Roadrunner camp, it probably makes sense for MH to move on, for proponents of the band are more than likely not with the label these days, and we all know what happens to bands who don’t have anyone in their corner…just ask Anthrax around Stomp 442.

The second live set for the band (the first being 2003’s uninspiring Hellalive),Machine F**king Head Live culls from various live recordings across the globe, particularly in Europe where the band is far bigger than they are in North America. At 15 tracks and nearly two hours, all areas of the band’s career is covered, even the lousy The Burning Red years with the passable “The Blood, the Sweat, the Tears” making an appearance. Fortunately, the wholly underrated guitar tandem of Robb Flynn and Phil Demmel make amends for any shortcomings that took place in the late 90’s/early 00’s, with cuts like “Be Still and Know” and the excellent “Locust” engaging in the sort of vibrancy that has come to define modern era MH.

Career rebound track “Imperium” serves as the live set’s peak moment, with Flynn and Demmel going to battle via blazing twin guitar harmonies. “Old” is still a gem like it always was, with Flynn doing his best to fire up a Manchester crowd, while “Ten Ton Hammer” and “Davidian” have an increased pop to them, especially “Ten Ton Hammer,” a song that works better in the live environment. Too bad “Blistering” wasn’t included. After all, this very site was named after that song…

There is no modern standard for live albums, probably because no one has put a live set out worth giving a fuss about. Machine F**king Head Live won’t alter the status quo, yet it does serve as a reminder as to how much the band has progressed from their baggy pants mid-90’s era, to Flynn’s frosted tips days, all the way to where they are now. Never count out Machine Head.