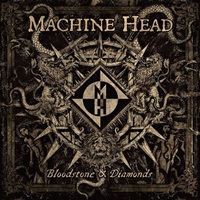 Seminal Bay Area thrashers Machine Head have hit a tricky spot with their latest offering, Bloodstone & Diamonds. Their first for Nuclear Blast, it seems the band has become a bit scatterbrained. If Bloodstone & Diamonds can be described in one phrase, it would be “all over the place.”

Let’s discuss the good first. Opening thrasher “Now We Die” is one of the best Machine Head songs they’ve penned since Burn My Eyes. An anthemic, bludgeoning track that benefits from some additional strings that are utilized to maximum effect. Then there’s the slow burner “Sail into the Black,” which begins with droning croons and methodically advances to some fireworks at the tail end of the 8-minute track. On the whole, Flynn and Demmel pull off some massive riffs, particularly on “In Comes the Flood,” “Game Over,” and “Eyes of the Dead.” The fretwork is particularly enjoyable on the leads and sizzling solos that scorch through much of the album.

Unfortunately, for every “Now We Die,” there’s a “Beneath the Silt” to make up for it. There are a number of experiments here, most of which do not hold up. The worst of which is the “Real Eyes, Realize, Real Lies” throwback track, “Imaginal Cells.” An apocalyptic collection of voice-overs with a riffy background, it serves no real purpose other to stretch an already overly lengthy 60+ minute album an additional three minutes. Then there’s the awkward ballad “Damage Inside,” which feels more alternative rock than anything else. The abundance of clean vocals does appear to be a hindrance rather than a help. The choruses of “Ghosts Will Haunt My Bones” and “Game Over” feel watered down and poppy (compared to the likes of say, “Davidian” or “Old”). The modern guitar tone on the aforementioned “Beneath the Silt” comes across as almost reminiscent of the band’s dabbling days in nu-metal. Finally, even some of Flynn’s screams are just plain odd, for lack of a better word. The worst offender is that of the ending of “Night of Long Knives,” which is almost cringe-worthy in presentation.

Bloodstone & Diamonds shows Machine Head trying to experiment a bit and venture down some new avenues. Unfortunately, many of the trials aren’t up to the Machine Head standard. There is a very solid 40-minute album in here, crawling and scratching to get out through the otherwise unnecessary and/or awkward tracks. Bummer.