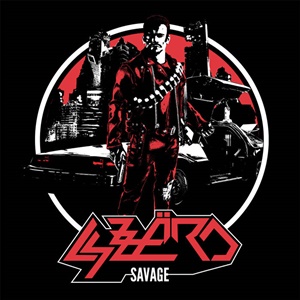 Hailing from Portugal and together since 2013, Lyzzärd (because umlauts are uber-cool) arrive on the scene with their debut full-length record in Savage. Going in blind without preconceived notions allows the listener to look at basic principles and become hopeful in collective execution – as a band wants to make a strong first impression. These nine original songs (plus surprise closing cover) display a quintet living for the 1980’s traditional metal scene, fueling their musical hooks with high pitched screams/melodies, bursts of speed, and of course loads of licks/riffs that necessitate air guitar or devil horns salutes.

Thunderstorms rumble and distant chopper/sirens wail for the start of “Nightwatcher”, the guitar/rhythm section introduction reminiscent of W.A.S.P. circa “Wild Child” before the energetic riff burst and lead gallops make you think you are back into early 80’s Ozzy against early US metal. The guitars and double bass supplementation can often steer Lyzzärd into the semi-thrash vein as well, offering up a more melodic Metallica feel for “Heavier Than Life”, the stutter step transitions a pleasant surprise while the vocals possess that road racin’ propensity. It’s obvious that guitarists Ricardo Azevedo and Tiago Tedim love their NWOBHM action in terms of harmonies, steamroller rhythm work, and bluesy/fiery lead combinations – making “Fire” and the Accept-esque “Living in the Dawn” a study in contrasts that showcases all facets of their hook-oriented, spot on axe play that keeps interest in the next section on point.

As a singer, Tiago Azevedo has a mid-range to upper register delivery, tolerable but can be a tad monotonous at times. It’s almost more well-suited to an 80’s Sunset Strip act, where if calling the shots this scribe was hopeful for some Halford/Dickinson-esque belting. When you hear the closing section of “Queen of Vengeance” for instance, the way he holds out ‘Queen’ need a little more beef, while his varied approach during “Survivor” favors his personality better. And as for a cover, instead of tackling a known metal classic, Lyzzärd decide to metalize the Flashdance soundtrack hit “Maniac”, originally done by Michael Sembello. Shining in the instrumental section where the band’s chops are on high, it’s a serviceable version that will probably get the 80’s mavens singing along to the chorus.

Savage puts Lyzzärd in that new traditional breed of potential, but not quite at the Striker/Enforcer caliber of awe.