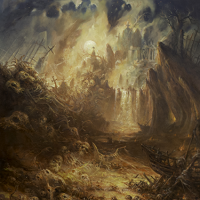 We’ve yet to frequent the band’s Facebook page (but will do so upon completion of this review), but hopefully Oakland’s Lycus have used the “Lycus on Facebook” line. Word play is fun, you know. It’s even more fun when taken to account how grim and sobersided the band’s three-song Tempest album is. Yeah, the songs are really long (chop ’em up and the rating will go up a notch), but packed into the funeral doom proceedings are bouts of black metal elements that do their job in keeping the album perfunctory and above all else, a side-step away from the norm.

Forsaking any kind of real format in terms of song construction, the band essentially pieces together long-form doom riffs and death bellows to make up their jams. Some may take umbrage that stuff like this can’t be anything else but boring, so found within those death and black metal excursions (“Coma Burn”) is where Lycus makes their bread, even if those moments don’t last as long as they should. The plod of “Engravings” is a wraparound of what Mournful Congregation and Esoteric have been doing, while the title track bakes into a noise-ambient bit at its conclusion that doesn’t complement the morose melodies the way it should.

Since most funeral doom bands don’t have to pussyfoot around their sound and/or ideas very much (probably because it’s about as limiting of a style as there is), Lycus may not receive full approval from the doom throng. However, the spells of death and black that race through Tempest’s meandering-on-purpose pace is what will keep folks outside of doom curious as to what the band will do next. 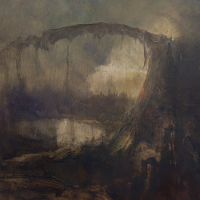