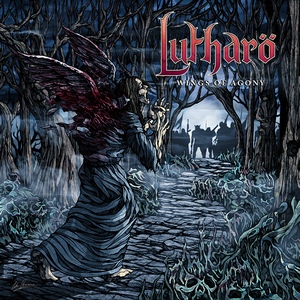 Despite this sort of thing being right up this scribe’s alley, Lutharo’s third EP is the first one to be properly examined. But better late than never, and the sonic punch that Wings of Agony provides is surely the type of thing that melodic death metal fans will crave – throttling death/thrash with a solid portion of power metal thrown in for good measure. It’s an addictive combination, that’s for sure.

What can be said of these five tracks is that they are all very high-energy and quick to get the listener involved. While some comparisons to Arch Enemy and Unleash the Archers may be warranted, with high-flying guitar theatrics and epic choruses to be enjoyed, Lutharo is wise to really avoid too many similarities. The strength of the riffing on this can’t be understated, as the band easily switches back and forth between more driving, thrashy tempos and triumphant slowdowns that tend to further draw out some flashy solos or melodies. The riffs are infectious, starting from the opener “Barren,” and the band is seemingly unrelenting when it comes to providing an energy burst with galloping and ear-catching riffs. Adding the icing to the cake is vocalist Krista Shipperbottom, who shifts from snarling rasps and roars to more power metal vocal territory at the drop of a dime, providing yet another constant energy source (see “Blood Lightning” in particular) with charismatic vocals. Wrapping it altogether is a sound production, allowing for things to be punchy yet heard (particularly the bass), giving it the fuel it needs to really grab the listener.

Wings of Agony is a thrill-ride. You’ll grin at the near-constant guitar heroics and sing/scream along with it with glee. This is exactly the type of melodic death/power metal combination that works in the best interest of both parties, and Lutharo take it for all it’s worth. Scorching stuff!