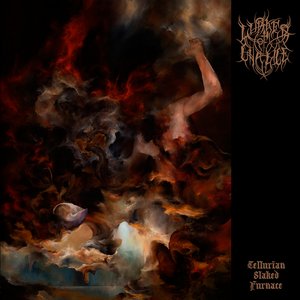 Despite a fond history with Leviathan, my own history with Jef Whitehead’s other seminal project is filled with a litany of mistakes. I do believe I looked the Lurker of Chalice LP in the face a dozen times during my time in Rhode Island and never jumped on the purchase. When a long evening in the work place presented me with an opportunity to introduce myself to the record, I was taken aback. Mostly dismay for having not indulged it for so long. Better late than never, I suppose.

Enter Tellurian Slaked Furnace, the first new release under the Lurker of Chalice moniker since the self-titled album in 2005. It isn’t a new album and it isn’t a straightforward compilation. Instead it is a collection of demo-era material for the project edited and shaped to make for an album experience. And it is a burly experience, its 12 tracks coming in at just under 69 minutes. Though certain elements overlap with the self-titled and the band diehard could likely pinpoint where these songs fall within the discography, the album is best considered as a holistic listening experience.

Lurker of Chalice historically served as a quieter distillation of darkness to Leviathan and Tellurian Slaked Furnace features less ‘metal’ indulgences than the self-titled. Elements of noise, ambience, post-punk, and a general inclination for the avant-garde haunt the listener. Apart from an appearance early on, the album is otherwise instrumental. The album cover is instructive in this regard: within awaits a heated, disorienting experience. A heat that is often just hot enough to produce discomfort rather than outright misery. Melody is regularly employed, serving sinister ends as much as in relief.

There is a place Tellurian Slaked Furnace reaches, a mood and element that many strive for but often fall short of. I don’t know that there is a term to encapsulate what I intend to describe here – a kind of alterity that is immediately recognized but cannot be adequately explained. Perhaps otherness in general is a fitting description for this as an experience. Like the past generally, there is an inherently hostility in the experience. This album was made in a different place and a different time. It does not belong here.

Therein is the magic in having it.