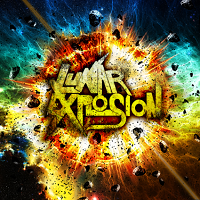 One wonders if upon entrance into the hallowed halls of Italian metal, you must study at the altar of three bands/artists if you plan on performing in a neo-classical, power, or progressive vein. Helloween, Dream Theater, and Yngwie Malmsteen must factor into some part of technique, sound, or execution, because for Lunar Explosion’s debut self-titled album, the nine songs I’m taking in have a lot in common with Helloween and Yngwie as far as inspiration.

Unfortunately for this quintet, the execution isn’t quite in the same caliber as the veterans they aspire to become. “Lunar Explosion” has a similar main riff as “Future World,” but with an out of place lead break that appears to sound oddly off key. The drum tone has this electric, slap-happy quality in the double-bass department that doesn’t cut the mustard next to the exotic chord choices within “Karnak” or the neo-classical stair step number “The Nest of a Swan.”

Mattia Sisca and Paolo Ferraro are not without talent at keyboards and guitars, but the true downfall within Lunar Explosion lies at the microphone stand of vocalist Raffaele Smaldone. Try as he might, he doesn’t have the lung capacity to sustain any falsettos, and often struggles in mid-range verse moments of “Saint George” and the Maiden-esque “Vasa Warship.” I would never say he is gruff, but he has a warble to many of his melody choices that place him monumentally below Roberto Tiranti or Fabio Lione when it comes to the power metal precision vocal sweepstakes.

When I need my fix of this neo-classically fueled power metal, it won’t be hard to remember that Lunar Explosion delivered a meteoric bomb here.