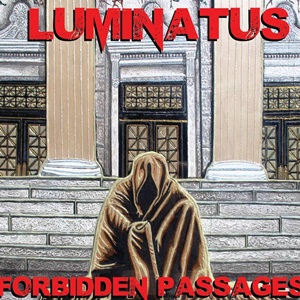 Good to discover some new bands in the symphonic metal style that don’t take themselves too seriously. Reading up on Luminatus’ Facebook page about their nerdy and fart grenade tendencies puts this act in rarefied air. Literally. Forbidden Passages is the latest full-length, serving up 12 entertaining tracks that are as much about folk/Pagan musical hooks and supplementation as they are bombastic and symphonic – never forgetting about the metal as the primary foundation. Not surprising to these ears why they’ve opened for Primal Fear and Sonata Arctica locally, as the band’s multi-faceted outlook helps achieve a wider fan base.

It is a given that keyboardist Dale Skutt layers the sonic stage through his finger flourishes and orchestrated touches – setting up important pomp fanfare work during “Chasing Rainbows”. Darker Kamelot touches plus a quick hitting male co-vocal make “The Dead Arise” one of the highlights – the guitar lines often matching the vocal melodies to create this stair step, dramatic atmosphere. An interesting folk meets Iron Maiden riff parade sets “The Depths” into another dimension musically, Holly McGinty floating about in her comforting operatic world while male galley background vocals surround the battle tempo to keep fists swinging and beer flowing. When the band choose to lock into a similar mindset in a straightforward manner, the results can be hypnotic and mesmerizing – “The Last Dragon” containing Holly’s best melodies while the mid-tempo, driving chord combinations ensure maximum headbanging. You could even see the bright, disco-esque meets 8-bit video game feel of “Halo Around My Heart” going over a storm at Comic-Con conventions.

The only disappointment probably comes in the lackluster cover art – something very much old school and could confuse listeners into thinking this is more of a classic Metal Blade-oriented act than what they truly are. Lovers of fantasy role-playing games, anime, movie soundtracks, etc. in more of a folky/symphonic metal context will devour Luminatus to the good.