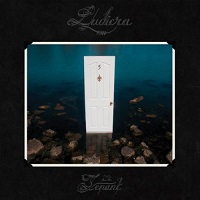 Like anything coming out of the Bay Area, proper description all but eludes Ludcira. How these guys (and gals) were ever branded as a straight black metal band defies convention and while yes, they do have some BM elements, they’re more along the lines of those inventive “melting pot” Bay Area bands

(read: Slough Feg, Hammers of Misfortune, Cormorant, etc.). That being said, The Tenant pushes and pushes things, most of which include boundaries, resulting in what is probably their best effort to date.

Since we’re all about tags and comparisons in these parts, we’ll cross-reference Ludicra with another branded-as-black-metal-but-is-not-full-on-black-metal band, Nachtmystium. Like the Chicago-based psychedelic BM’ers, L87dicra find footing with the basic tenets of BM (i.e. fuzzy chords, scratchy vocals, etc.), but the real aim appears to be the rocked-out portions of songs like “In Sable,” which begins with a momentous surge that is tough to be denied and the momentous “A Larger Silence,” a song

that is destined to be a live favorite. Better yet, the band never drifts too far into one area, proposing a sultry mix that allows this seven-song display to be balanced.

Melodies are a plenty here, specifically on opener “Stagnant Pond,” where the band weaves some mournful dynamics in and out of loose 70’s metal avenues. Same bodes for “The Undercaste,” a song that grapples with doom exploits (think a less dramatic Candlemass). To top things off, “Truth Won’t See You Free” is a manic, speed-laden BM monster that would have the appearances of a traditional BM song, but unites the harsh attitude of crust punk and sensibilities of classic metal.

In relation to the band’s well-received Fex Urbis Lex Orbus from 2006, The Tenant proves to be a more explosive album. There’s this degree of immediacy and attack that just wasn’t there before and if anything, this type of black metal (again, if you really want to call it that), has more danger, grit, and intrigue than most of what is coming out of Scandinavia today. One of those “springboard” albums, The Tenant should make Ludicra a household name.