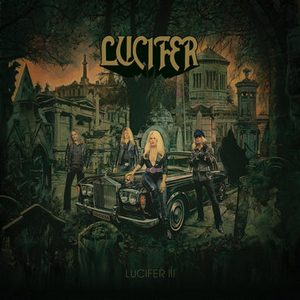 2018 brought about Lucifer II and the songwriting team of Johanna Sadonis and Nicke Andersson, effectively putting a nice twist on the formula that started from the first album and brought the band away from a more direct doom feel and into more wide-reaching territory. With the same songwriting duo at hand for III, it feels more of a successor to the previous release while tweaking the sound in a way that augments its strengths.

With nods to classic rock along with that darker and groovy doom underbelly, there’s quite a bit of room for Lucifer to play in. Tracks benefit from the band altering the percentages of those two elements and providing an experience that keeps you ready for some twists and turns. Some straight ahead fuzz and doom flirts with catchy melodies on “Coffin Fever” in a way that gives it a more engaging feel than other acts that solely rely on the fuzzy doom crunch to power them through tracks. Likewise, the infectious and delightful energy of “Flanked By Snakes” and “Lucifer” oozes its ‘70s rock inspirations without going too far overboard – giving that timeless feel to the music while still maintaining some occult darkness to steer it away from total retro worship. Other songs like “Midnight Phantom” find a solid 50/50 footing, dabbling equally with heavy riffs and guitar melodies that will stick in your head for days. If anything, this is the biggest selling point of III – while Sadonis’ vocals capture that same bewitching charm they’ve always had and are a clear focal point, there’s a larger amount of earworming guitar riffs and solos that help to give the album a greater lasting appeal.

III seems to more or less perfect the ideas that the band started with on II while bringing things up a notch. It’s pleasantly heavy and dark enough to keep those doomy vibes in check, while injecting some gloriously catchy melodies to further separate themselves from the rest of the pack.