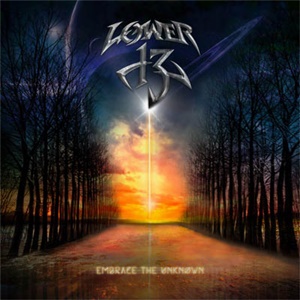 Infusing a mixture of classic power/true metal influences with a bit of modern aggression and melodic finesse, Lower 13 hail from a fervent Cleveland metal scene, releasing three studio albums to date since their inception in 2006. The power trio have arrived at their fourth album Embrace the Unknown, tackling a mixture of heavier, almost progressive/extreme elements against crushing rhythms, fluctuating tempos, and a vocal attack that can be smooth and radio-friendly one moment, then vicious in a melodic death/metalcore fashion the next.

The jagged, angular guitar work of Patrick Capretta circles, divebombs, and obliterates the sonic landscape – Revocation and Nevermore coming to mind especially in the light meets dark twists of “Hollowed” where the dual clean/screaming nuances captivate in a similar fashion as the delicious, progressive parts unfold. Occasional use of alternative/modern rock chord patterns give other material super catchy atmosphere – especially when the vocals mirror the uplifting nature of the music, as “Darker Days Ahead” achieves. It’s evident the three-piece love current leaders of the modern movement like Trivium as easily as taking directives from say Allegaeon or Arsis, but temper things with machine gun riffing of the power variety like a chunkier Iced Earth on “Heal”. These musicians give the listener plenty to latch onto – diverse songs that occasionally include acoustic movements, energetic interplay, killer transitions and the versatile melodies in the vocal department ensure no ear fatigue or boredom. The lighter, 70’s-acoustic rock touch for closer “Continue On” ends the record on a left-field note – hopefully an area Lower 13 continue to develop on future albums.

Many familiar with the bulk of the Pure Steel catalog may be surprised that an act like this would end up on their roster – as the metalcore/modern screams and heavier tones at times appeal more to a younger demographic. Embrace the Unknown proves worthwhile though for those who love a heavier power/progressive mixture of metal with solid multi-pronged vocals and a modern angst penetrating the material.