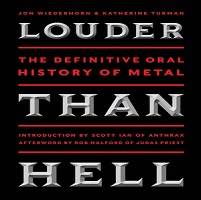 Louder Than Hell – The Definitive Oral History of Heavy Metal is yet another stab at trying to tell metal’s story. Authors Jon Wiederhorn and Katherine Turman have taken the less-traveled approach by using over 250 interviews as basis for text. As in, this is all “right from the horse’s mouth” material, which is a good thing. It’s better to have that than some broad-sided writer whose knowledge of metal is predictably top-heavy, unable to navigate the endless bumps, folds, turnovers, and difficult terrain of the genre.

Wiederhorn and Turman cover both metal’s early years as well as its various sub-genres, including a run on everyone’s favorite, nu metal. To the die-hard, some of the stories have been told to death: Metallica’s rise, the Big 4, Floridian death metal, etc., but the interviews provided are gold, especially when the bad-mouthing begins. The various barbs aimed at the likes of Dave Mustaine and Fred Durst are fun to read, but the limited space generated toward various high-profile splits in the Maiden, Priest, Fear Factory, and Pantera camps skim off the top of what should be chapter-long ordeals.

The big flaw with the book is its tendency to lend toward the carnal side of metal and hard rock. Chapter after chapter is loaded with stories of debauchery, a choice few making artists like Korn’s Jonathan Davis and Fear Factory’s Dino Cazares look like total Neanderthals, especially the section on nu metal, which makes that entire gang (Korn, Coal Chamber, Limp Bizkit, etc.) come across as a even bigger bunch of buffoons than most of us already surmised.

Had Louder Than Hell – The Definitive Oral History of Heavy Metal focused more on the music and various layers metal has to offer, the book would be an undisputed winner. Alas, it drifts too close to the stereotypes that the mainstream has equipped our scene with, so “definitive” this is not. It’s a good read for unintentional laughter, though.