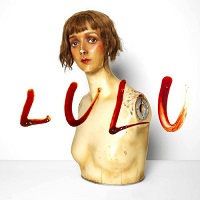 Consider any good faith Metallica won back with Death Magnetic and subsequent Big 4 shows to be squandered. Because of their size and stature, the band can do virtually as they please, which includes this artistic abomination with Lou Reed entitled Lulu. It’s as every bit as disjointed as St. Anger was, perhaps even moreso, proving that Metallica for all intents and purposes, is clueless and decidedly arrogant, unable to gauge just how disengaged from their audience they really are.

The album runs like this: Reed takes some of the poetry he penned for a German play (supposedly about how some chick runs into Jack the Ripper), and rambles over Metallica demos. Stretch it out for 10 songs

and 87 whopping minutes, and that’s what Lulu amounts to. Reed (a legend in his own right) is capable of taking leaps like this, so his rambling, total disregard for cadence and really weird lyrics (see: “Little Dog”) aren’t a surprise. Metallica, though, should have thought this out more, for what initially seemed like not a half-bad idea, has turned into a freight train of negativity and would-be bad press that cannot be stopped.

Some real laughers and head-scratchers here, most notably “The View,” which has James Hetfield yelling “I am the table!” over and over again, serving as thesong’s

focus point. Almost as bad as “My lifestyle determines my death-style,” Hetfield’s repetitive barks here are still not as bad as Reed’s diction on “Pumping Blood” or the really bizarre Reed-on-thrash “Mistress Dread.”

Musically, a lot of what Metallica pumps out is third-rate material that pales in comparison to the revived and lively sound they produced on Death Magnetic. Album closer “Junior Dad” turns into an exhausting 19-minute failure, making one pine for the days of “Outlaw Torn” or better yet the scattershot and meandering “The Nameless Feeling” and “All Within My Hands” from the aforementioned St. Anger. It’s really that turgid of an album, usually prompting one to beg Reed to shut up.

to one another, Lulu has virtually no shot of matching wits with Megadeth’s

Th1rt3en, which coincidentally was released the same day. Quite hilarious to hear Metallica defending this in the press, all the while knowing full well that not only Megadeth has wiped the floor with them, so has Anthrax. Lulu is such a mess that’s it’s funny

. Easily the worst thing the band has done. Good luck recovering from this one…