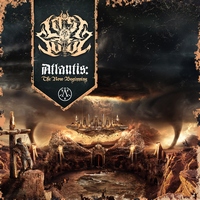 Poland – land to the titans of extreme metal: Behemoth, Decapitated, and Vader just to fire off three from the cuff. No matter the output, Polish metal almost always seems to have an unrelenting intensity and fury to it. Think of the 3 bands already mentioned – despite their differences in nature, there’s that near-militant quality to their material’s fury. Lost Soul fits into this category as well without complaint.

Blackened death metal is the name of the game for Lost Soul, who are returning from a six year drought of new material. But before you shout, “ugh…more Polish death metal,” know that Lost Soul have a few things going for them that adds some extra icing to the cake. For starters, Atlantis seems to be a conceptual album (based upon an interview online) and there is a certain cohesion and flow to the material. It’s not just a bunch of blastbeats, technical riffs, and guttural roars. Tracks have no issue in regards to slowing down a bit to switch things around. “Perihelion” churns in the mid-tempo range, incorporating the black metal elements to engage in a more majestic approach. A few of the songs, like “Frozen Volcano” and “Unicornis” see the band implementing a choir and/or clean vocals to give a more well-rounded approach. “The Next Generation” even uses a bit of groove in between more traditional black/death moments.

With all of the elements at play, it is important to note that this is still an extreme metal release, and Lost Soul carry the needed weight. The speedy riffs are here, with appropriate amounts of evil and heft behind them (see the opener, “Hypothelemus” once the wheels start turning). Lost Soul betters themselves by managing to blend all the elements above into their material, and allowing it to be no less crushing in the end. Atlantis: The New Beginning gives you the blistering Polish death/black assault that you are craving, but sprinkles it with added flavor to keep you coming back for plenty of return listens.