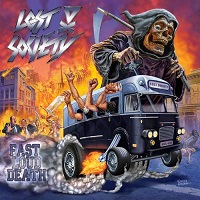 Thriving times for thrash fans. Everywhere you look, you can find prime albums churned out throughout the globe, as the veterans and newcomers aim to take residency in a competitive marketplace. Look at the four teenagers who comprise Finnish speed/thrash act Lost Society.

These 17-19 year olds began in 2010, winning a Global Battle of the Bands in 2012 where they gained an opportunity to perform in London. Fast Loud Death is their debut full length, recorded with renowned producer Nino Laurenne (Amorphis, Lordi) in Sonic Pump Studios (Finntroll, Sonata Arctica). The opener “N.W.L.” possesses this mid-tempo level stomp at the start, with guitarist Samy Elbanna using a low, Dave Mustaine sneer through the first verse, but quickly moves into speedy crossover rhythms and gang vocals, adding in a Nuclear Assault meets Gothic Slam appeal.

At other times the riffs and drumming has a galloping nature, providing a brief reprieve from the normative speed jackhammer proceedings –  check out “Kill (Those Who Oppose Me)” and “Lead Through the Head” for these elements. Fellow guitarist Arttu Lesonen pushes out a bevy of Bay Area mentors in his schooled lead breaks- Forbidden-like in “E.A.G.” Kirk Hammett-esque for “Braindead Metalhead,” but all around pure adrenaline charging and major entertainment for all metal heads.

Lost Society recall the early years of thrash- when punk and speed came together to create an angry locomotive that rolled over the competition. 13 songs and 35 minutes that should be easy to transform to stages both large and small- Fast Loud Death pushes the speed/thrash pedal on the highest accelerator possible and throws down a boatload of hooks and gang choruses that won’t leave your brain anytime soon.