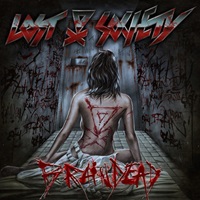 Finnish crossover thrash quartet Lost Society have reached the juncture in their career which separates the superstars from wannabes – as Braindead is their third studio record. We all know how the progression of success should go: album one flexes your youthful passion while showcasing obvious influences (Fast Loud Death and its Nuclear Assault/D.R.I. meets Municipal Waste humorous execution), and slowly establishing better, more original songwriting on the follow up (Terror Hungry offering up more mid-tempo riffing and versatility in the musical interplay) – setting the stage for the (hopefully) grand salvo.

Considering three of the eight cuts clip the six-minute mark, Lost Society definitely wish to veer in a slightly more elongated direction than the punk and beer infused anthems of yesteryear’s recordings. It wouldn’t be far removed to think that “I Am the Antidote” and “Hollow Eyes” contain a lot of Machine Head-ish bounce and groove, both in the tempos and Rob Flynn-ish vocal patterns from guitarist Samy Elbanna (filtered of course through a John Connelly scream register). Glad to see Mirko Lehtinen get a robust and full bass tone that gives girth to these tracks – D.D. Verdi and Frank Bello would be mighty proud of the standard they set for these young Finns.

Not all of Braindead has totally erased the early thrash and bash stance Lost Society deliver – check out the manic speed riffs plus back and forth gang vocal action during “Rage Me Up” that will make pits whirl about and stage divers leap for glory, and its Exodus meets Nuclear Assault follow up “Hangover Activator” engages those fist pumps too. The highlight for this record is “Only (My) Death is Certain” – a sprawling epic that contains a lot of slower Metallica meets Machine Head twists and turns, exemplary heavy to quiet back to heavy guitar transitions and a larger than life riff hook that keeps your headspace returning for more.

Lost Society took a sizable risk in shifting the focus to a wider dynamic in terms of tempos and arrangements – but should be applauded as Braindead will earn them long-term rewards for creativity beyond the expected thrash norms.