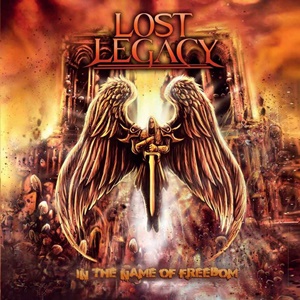 Hailing from the Bronx in New York, Lost Legacy are a veteran power/heavy metal act together since the late 1990’s. Aware of the uphill climb in establishing themselves in specific melodic/traditional genres that aren’t exactly ‘hot’ compared to overseas acceptance, it’s not surprising that In the Name of Freedom is the quintet’s second full-length, and first in eleven years. Signing to Pure Steel Records, maybe now is a better time for broader underground appeal – especially given the seasoning and creative process these tracks possess.

These musicians travel across decades of influences from traditional, power, and doom to occasional thrash/progressive avenues that keep the arrangements and performances dynamic, energetic, and exciting. After a two-minute instrumental set up for “Rise to Glory” that features an alluring keyboard-layered sequence, the eight-minute plus “My Faith” bursts from the speakers with power-driven harmony-oriented guitars and equally potent melodies from singer David Franco – an effort that blends together the spirit of Iron Maiden against some of the sophistication and versatility of Tony Martin-period Black Sabbath and Symphony X. The record fluctuates between steadier, shorter anthem-like pieces such as “Front Line” and “Enough Is Enough” and the occasional eight-minute plus epic track where neoclassical sophistication plus extended musicianship spots become part of the output, the title cut sure to align well with those who love older Yngwie Malmsteen and Savatage magic. Guitarists Scott Bennett and Jorge Pulido pull together an assortment of influences – occasionally reaching back into the Maiden/Accept archives for solid rhythm/riff combinations to make “Will You Remember” a second half standout. At 45 minutes, the record contains just enough information to consume and process without overstaying it’s welcome – perfect for those who miss US power mechanics with a lot of late 80’s/early 90’s textures.

Lost Legacy would have been a perfect band to astound during the Powermad or Classic Metal Festival days – and proof that this style may be lurking in the shadows but hasn’t faded away. Let’s hope that it doesn’t take eleven more years for the third studio record to hit the streets, as these gentlemen deserve more attention and hopefully can make up for lost time.