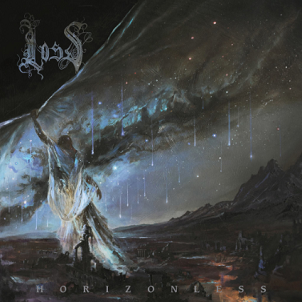 Until Loss and Pallbearer came along, American doom was largely relegated to the old-time, stoner circuit. Not discounting the merits of The Obsessed, Revelation, Solitude Aeturnus, et al, but Yankee-styled doom hadn’t provided anything of substance in quite some time. The release of Loss’s Despond and Pallbearer’s Sorrow and Extinction (separated by almost a year, both handled by Profound Lore, too) were a much needed shot in the arm, both bands resounding in their execution of sorrow-filled doom, albeit, coming from a different place. We all know what became of Pallbearer; Loss’s six-year break between studio albums comes to an end with Horizonless.

The band, at least somewhat, has loosened the reins on the funeral doom strokes that were all over Despond. Sure, the slow-mo, slow-going action is still firmly in place, as evidenced by masterful opener “The Joy of All Who Sorrow,” which chokes out some gorgeous twin guitar melodies. “All Grows on Tears” serves as the album’s true funeral doom finisher, just eking out some semblance of a tempo while mournful melodies again strike heavy and hard. A series of short interludes and experimental forays momentarily trip up the album, but it is the abyssal churn of “Banishment” and resounding plunge of “When Death is All” (featuring guest vocals from Leviathan’s Wrest and Dark Castle’s Stevie Floyd) that solidify matters.

Certainly on par, or at least a notch above Despond, Loss have made good on the six-year wait between albums with Horizonless. Full of weight, desolation and never-ending sorrow, Horizonless rightfully situates Loss as an American doom monolith.