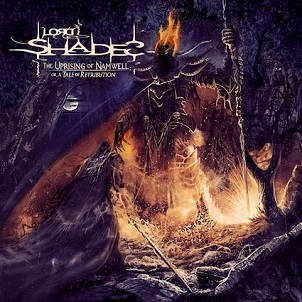 Not to be mistaken as a band prone to wearing Ray Bans like nobody’s business, French unit Lord Shades is an epic extreme metal band, proffering their own storyline revolving around three worlds: Firë-Enmek, the land of Mortals and a land of suffering; Namwell, a land of bliss and harmony; and Meldral-Nok, a cursed land where only chaos and fire prevailed. Whether this has its desired effect on Lord Shades’ would-be audience is anyone’s guess, but, they do throw down a rather mighty gauntlet on The Uprising of Namwell, their third full-length and first in six years.

To these ears, Lord Shades come across like a bolted-on blend of Akercocke hanging out Suidakra, adorned with a jean jacket of various symphonic black metal bands. The fact Lord Shades don’t have a defined sound actually does them justice across the album’s rather lengthy and large landscape. Whereas some cuts rely on brutality and orchestration (“The Gift”), others, such as “The Revenge of Namwell” and “A New Dawn” (which clocks in at over 15 minutes) rival the sort of epic storytelling and penchant for drama that the folk metal elite offer at their best. Even as such, Lord Shades often keep their brutal death metal backdrop in play, in particular, on the aforementioned “The Revenge of Namwell” and “Nightly Visions.”

Because their storyline is central to them and only them, Lord Shades may run the risk of being too far on the outskirts of what most epic metal folks want, which is relatable, identifiable stories. But, the sheer bravado and complexity of The Uprising of Namwell shows Lord Shades are worth a good shove into the front of the castle gates, ready to cross the moat if necessary.