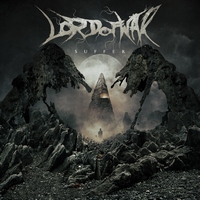 It’s always nice when things are worth the wait. Lord of War released their debut, Celestial Pestilence, 5 years ago at this point. Going so far as to do a disappearing act for a while, it seemed we may have seen the last of the Californian atmospheric death metal act. But alas, they’ve brought forth Suffer, their sophomore release, and it’s worth its weight in death metal glory.

Lord of War aren’t going too far outside of the norms, but the way that they pull together elements is worthy of mention. Melodic and sometimes soaring atmosphere collides with brunt, death metal aggression and leads to some excellent transitions, both within and between tracks. “Drowning” uses near-melodeath melodies atop synths, contrasting with mid-tempo stomping, more frenzied soloing, and a well built-in breakdown to keep things interesting. “Manufactured Existence” and “Killing Must Feel Good to God” up the speed game significantly, keeping some real scorching solos and melodic riffs interwoven before switching gears into grooves or breakdowns. Mid-tempo chuggers like the title track and “Skin” hammer home densely-packed riffs that balance a few melodic/space-y moments with potent breakdowns. Often a maligned segment of these bands, Lord of War has a real strength in handling breakdowns, making them feel earned and not relying upon them to carry the tone or momentum. They often feel like an added bonus.

Suffer takes strong cues from the modern death metal scene and wraps them up into a punishing yet memorable package. Able to tap into both the atmospheric and deathcore communities with equal might (not to mention the usual Unique Leader tech-death fanbase), there should be plenty of metal fans who find something to enjoy with Lord of War’s latest. Heavy enough to knock down a few walls, but plenty of interesting things happening in the background to draw you in for future listens.