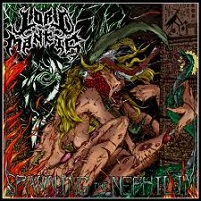 Featuring ex members of Nachtmystium and current members of Indian, one approached Spawning the Nephilim with a degree of hopeful trepidation, if that makes sense. You see, Nachtmystium are great and probably the best metal band to come out of the Midwest (more specifically, Chicago) in the last ten years while Indian…eh, not so good. That being said, Lord Mantis and their debut Spawning the Nephilim create the quite the ugly racket and it’s not all bad, but hardly all good.

The issue with this album is there’s a death of melody to be found, in spite of what the band bio says. Even the loose connotations to black metal (probably because of guitarist Andrew Markuskewski’s involvement with the aforementioned psychedelic black metallers) seems to be unfounded. Sludgy, low-end heavy riffs make up the jist of this seven song platter and when you look for hooks, you get more shards of distorted Lair of the Minotaur-esqueguitar

“Hit By A Bus” emerges as the album’s best jam, probably because of awesome chugging being tossed about; same for “Lord Mantis.” Sanford Parker (Lair of the Minotaur, Nachtmystium, every band from Chicago) gives Spawning the Nephilim a lively, loose sound, that brings the de-tuned guitar work to the fore, which makes the album all the more ragged and rigid.

Depending on one’s affinity for gruesome, hook-less sludge metal that aligns closely with Coffins, old Khanate and the like, Spawning the Nephilim will either sink or swim. Still, there’s loads of white noise on this thing and it puts up this wall that’s hard to hurdle, no matter how hard you try.