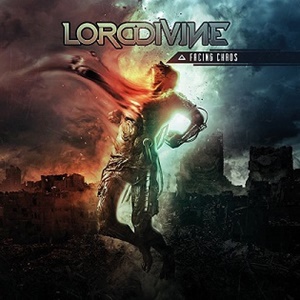 When looking into background information on Argentina’s Lord Divine, some interesting aspects crop up. The progressive metal sextet has been together since late 2002, releasing four previous full-lengths on domestic labels that alternate between English and Spanish languages. Facing Chaos as their Fighter Records debut and fifth album has a new vocalist in tow – one probably well-known to ardent power/progressive metal fans as Diego Valdez has been involved with Dream Child, Helker, Iron Mask and just announced as the new singer for Lords of Black. Already anticipating some stellar musical compositions to back up Diego’s Dio-esque meets Russell Allen prowess, it’s exciting to see what sounds emanate from these eleven tracks on display.

The musicianship corrals a diverse selection of power and progressive metal tactics – balancing out the obvious catchier verses and choruses with intricacies and technically solid chops during the instrumental sections and lead breaks. Check out the time signature interplay and keyboard/guitar dazzling during “I Am” and “Be Afraid” to know that Symphony X and Dream Theater probably rate very high in the Lord Divine reference charts. The rhythm section certainly knows how to propel things into semi-thrash velocity when necessary, as “Into My World” showcases Lord Divine at their heaviest. Special guests appear on “The Darkest Light” and “Divided” with vocalist Mark Boals and guitarist Julian Barrett respectively – and it’s nice to hear the clear command of the ex-Yngwie singer shine once again, guiding the song into the neoclassical progressive heavens a la current Angra. Considering most of this material levels off around the five-minute and change mark, the band save their epic side for the almost twelve-minute “The Rage on Me” finale – pulling out all the stops through symphonic textures, layers of galloping/crunchy guitars, older synth tones, and the always invigorating shred instrumental antics that mesmerize listeners.

Diego can do no wrong, his deep, rich melodies blending seamlessly to the compositions Lord Divine put forth. Facing Chaos aligns well with those who love the 90’s discography of Symphony X and Dream Theater – plus a bit of that South American finesse to keep things interesting. Impressive and satisfying, the future looks promising.