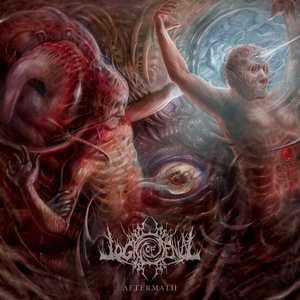 Brutal, slamming death metal with a lofty concept? Always worth a shot – certainly a nice break from the usual subjects. Italian death metal squad Logic of Denial have brought forth a concept album for their third effort based on the stages of grieving. A three chapter concept (separated by interludes) sets things up for Aftermath, even though in the end it comes across as more brutal, technical material.

Suffocation, Deeds of Flesh, and Pyrexia are a good focal point for where to describe Logic of Denial’s sound. It’s brutal, fast, somewhat technical but not overbearingly so, and they can throw some slams in from time to time. It’s a familiar and well-worn formula, but they understand what makes it all come together. Aftermath is a whirlwind of intensity from start to finish, with the aforementioned interludes giving the listener their only real chance for respite. The level of songwriting is on par with any act of this nature, but ultimately the problem is that it sounds no different either. Even given the conceptual album background, you are still getting the same ‘brutal death metal’ experience, and the one-dimensional gurgles aren’t going to reveal much in the way of the lyrical content. While one can wax poetic about all of the furious riffing and frantic solos, it does little to go against the grain.

For what it is, Aftermath does exactly what it needs to do. The speed of a freight train and the prerequisite brutality in spades, no one will doubt Logic of Denial’s sheer technical ability. Certainly brutal death metal fiends will find no flaw in what the band delivers. But at the same time, one can’t help from feeling like the concept could be brought to life a bit more if they branched out from the norm from time to time.