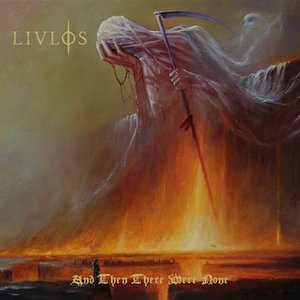 One style of music that all of us at Dead Rhetoric can usually agree upon is that of melodic death metal.  Particularly when it reaches further into the deathly, old school side (as opposed to the more pop-driven commercial sound of more modern acts).  So it should come as no surprise that Livlos’ second full-length (and first for Napalm Records), And Then There Were None, comes across as an enjoyable and impressive piece of melodeath.

No clean vocals, no synths, just heavy and thundering riffs atop glorious melodies.  Livlos brings forth some very energetic and ear-friendly tunes, such as the galloping and raging “Gallows” and vicious “Pallbearer,” which storms through with frenetic blastbeats and full-on death metal aggression, but at the same time keeping the music memorable enough (particularly in the lead guitar) to bring you back for plenty of spins.  They have really managed to capture that more visceral blast of energy that bands like Detonation or In Thy Dreams could muster up – all while bringing the production values and sound into the modern era.  Of course, some tracks lean further into melodies and mid-tempo moments like in “The Purest Black” and “Mortal Severance,” where the tides can almost veer into a more doomy feel for a few seconds and allow a more anguished feel instead of the more dominant aggressive one.  It all makes for a well-kept release that manages to hit hard and keep it coming over the course of the album without becoming redundant.

And Then There Were None uses some elegant melodies within a harsher and brutal melodeath vibe to great success.  It makes that bloodthirsty death metal approach, but tapers it with a grace of more established acts within the scene.  Livlos have a sound that should appeal to both fans of the more melodic and abrasive ends of the genre.