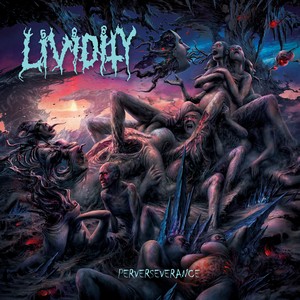 It has been a long time coming since brutal death metal act Lividity has popped out a new release. Nine years in fact, discounting any live/split/compilation type of material that is. But Perverseverance is here, and it’s exactly what you would expect from the veteran act. Which isn’t a bad thing at all.

The emphasis is on the word brutal when it comes to Lividity’s playing. That bludgeoning death metal energy is what drives Perverseverance from start to finish, re-instilling that late ‘90s dedication to the most throttling and visceral death metal that one can imagine. And it is what it is, in all of its glorious carnage. You know that you’ve heard this sort of thing time and time again through the years, but everything here works entirely as it was meant to. The incessant sampling that will make you giggle or cringe based on your affinity for sexual and/or poop-related clips, the frantic and dizzying guitar riffs and intense slams, as well as the gurgled vocals and blasting drums all reek of ‘back in the day.’ But there’s some sort of charm that finds its way through every clichéd attack, perhaps due to the band’s tried and true formula and inability to compromise. Most death metal simply doesn’t capture that same level of ‘go for the throat’ bludgeoning nowadays.

While Perverseverance sounds exactly like something that could have come out about two decades ago, there’s something endearing about their approach to brutality. There’s a level of catchiness, directness, and sheer chaos at hand that extreme metal fans will be happy to eat up with glee. A much more palatable experience than slogging through the latest Entombed ripoff or sterile tech-death offering, that’s for sure.