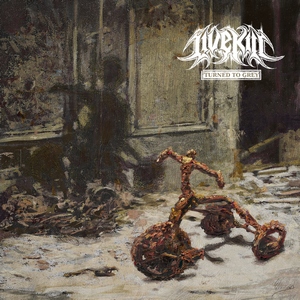 Coming straight out of the gates with a conceptual release isn’t something you see with many metal groups. Livekill, on the other hand, took inspiration from a story of a 3-year old who died in the Hiroshima bombing at the tail end of WWII. The artwork itself, regardless of background, is a poignant image that you aren’t going to forget easily. The same goes for Livekill’s musical assault.

The quick and simple description of Livekill’s music is that of groove. Each of the four tracks within display a seemingly endless supply of the stuff, and it all seems to connect. Falling somewhere between metalcore and early Slipknot at times, there’s also a more pure hardcore edge that the band uses to sharpen its image. Interesting guitar riffs, like the opening to “In This Moment,” are bound to grab some listeners who dig the modern end of the metal world, as they certainly seem more than capable of adding nuance and slight technicality into things without messing up that all-important groove element. Vocally, there’s a solid switch-up between the shouts and clean vocals, allowing the music to keep things on the heavier side (for the most part – see the title track) while providing some needed hooks.

While it may seem like a short release, it’s one that people will be quick to smash the repeat button. The grooves are entirely satisfying, and the melodic yet aggressive blend of the band is something that should bode well for them as they continue to expand their sound. Turned to Grey is a thoughtful EP that feels quite mature for a first release.