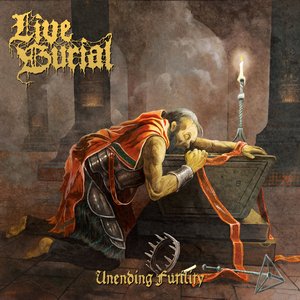 Sometimes a title and an album cover give you a solid indication of what you can expect when you listen. Unlike books, with metal albums you can often judge by the cover. Unending Futility is not what I expected based on those two items, however. Stylistically on same death/doom continuum as Solothus from a few weeks back, whereas that group leaned into the doom, Live Burial often leans heavily into the death. Unending Futility spends more time ripping open chests than it does bemoaning the endless weight of existence.

And ripping open the corpses of death metal’s past is certainly part of the charm here. Classic sounds from both sides of the pond are alive and well here, with pre-Human Death as much on display as Asphyx. The release doesn’t share the typical thickness that comes to mind with the UK death metal group I encounter most often (Grave Miasma) but it works well for the blades-and-bones sound the band enshrines itself in. “Condemned to the Boats” is a whirlwind of riffs and desecration and while opener “Seeping into the Earth” does offer moments of bleak reflection, it’s similarly in top gear most of the time.

The back of the half of the album is for my money where the strongest material lies, particularly in “Rotting on the Rope”, a suffocating black morass. Thought the first half of the song is similarly high tempo, bass takes an almost lead role and pushes the band through a series of increasingly despondent waves. The bass maintains that roles across the brief interlude “Winds of Solace” and the surprisingly visceral “Cemetery Fog”.

Though laced in the camp one would expect, Unending Futility hits with an uneasy closeness given the reality of our current day-to-day. Embrace the rot, I suppose.