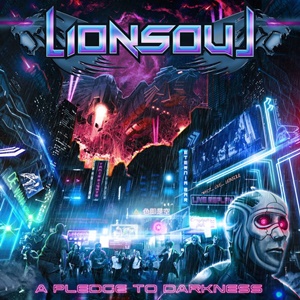 This scribe has a soft spot for power metal – groups like Helloween, Gamma Ray, Lost Horizon, Iron Savior permanent staples in the playlists when needing that uplift energy charge. Italian quintet LionSoul possess a lot of similar qualities as these acts, and yet wish to push the parameters for this third album A Pledge to Darkness. Instituting a diverse set of influences that include everything from cyberpunk and industrial strains to thrash, melodic death or 80’s synth-wave elements, rest assured that one thing you won’t hear through these eleven tracks is any sense of monotony as far as the tempos, structures, and overall songwriting.

When diving into songs like “No Beginning (Nor an End)” or “Exile to Arise”, beyond the obvious speedy tempos and hard-charging transitions you’ll hear a magnificent, personal edge to the melodies of vocalist Ivan Castelli. His voice has the leather lung spirit of a Russell Allen, put through a lens of Terence Holler from Eldritch – a killer combination that separates him from the norm in this genre. Often the guitars contain a thicker attack than what is typical of this genre – which probably explains the melodic death/thrash comparisons that appear in specific parts of “Wailing in Red” (featuring guest growls from Claudio Facheris) or the progressive, percussive shifts against the cyber/electro accents during “Soldier Through Time” that mirror the brilliant musicianship of Angra. Lyrical inspiration comes from Sci-fi, 80’s films, and short stories beyond the imagination – themes from Blade Runner for “Man, Machine, Almost Rhyme” to “Continuum / Exile to Arise” which uses Isaac Asimov’s Foundations Cycle for plot influence are sure to excite most followers. A space cowboy style ballad for “Red Flame” pushes the diversity meter again, the softer spaghetti Western licks and piano accents during the verses giving the heavier chorus more emotional impact.

LionSoul may struggle to garner the full respect of all power metal followers, but A Pledge to Darkness could be that pivotal record to have most sit up, take notice, and appreciate the risk-taking measures present.