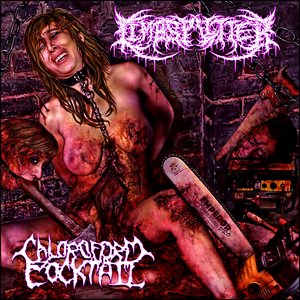 One look at either the band name or album art and it’s quite clear that subtlety is not Limbsplitter’s strong suit. But when you play brutal death metal, there really doesn’t need to be any subtlety either. Chloroform Cocktail is the band’s first full-length, and checks off all the required boxes you’d expect. But what you might not expect, is how long it will stay with you after the album ends.

Chloroform Cocktail is incredibly intense and does little to allow you a moment to catch your breath. Once the initial soundclip that beings the album finishes, be on the ready for jackhammering blast beats, frantic quasi-technical riffing (think more Deeds of Flesh than Obscura), occasional groove, and of course, guttural growls and screams that sit front and center in their brutality. In other words, brutal death metal 101. But it’s also quite obvious that Limbsplitter has paid attention to what works in the style (it helps to have members/ex-members of Embalmer, Necrotic Disgorgement, and Regurgitation involved in the act). At 27-minutes, it goes straight for the jugular and there’s never a dull moment. But there’s a surprisingly catchy angle to the way they play – the intricate riffing in particular (see “Slaughtered Slut”) is something that one can easily get into, as are the moments of groove sprinkled throughout. The bass also gets some standout moments (“Caustic Cumshower”), and is quite impressive compared to what tends to pop out of the brutal death genre.

While the uber-gory cover art and equally sick song titles/content aren’t exactly going to win over anyone but the death metal die-hards, this is the type of album that will have exactly that fanbase salivating when they hear a few seconds of it. Chloroform Cocktail is more impressive than one might initially give it the credit for, and is proof that attempting to spice things up from a musical perspective doesn’t have to come as the cost of sheer extremity. Limbsplitter have delivered a real ripper that sets them up to really jump up the death metal ladder.