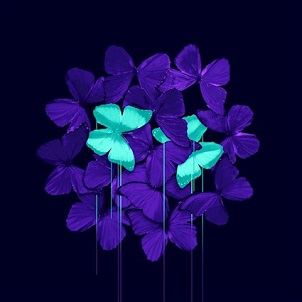 Right off the bat with the purple and light blue color, you know you aren’t going to be getting something on the bleaker side of things with Lightworker. A metalcore-esque act that has only released a previous EP (Resilience) up to this point. But if Fury by Failure is anything to gauge the act by, it shouldn’t be too long before fans of melodic metal start to take notice.

Whether it’s easier to describe the band using the metalcore or post-hardcore tag, it’s clear that Lightworker stands on the lighter, and more emotive side of the genre. The heaviness is there, don’t worry, but the moments that all seem to stand out for the act inevitably are circled around their gentler side. “Cholera” starts on the pensive side of things before digging into a more rousing chorus, but clean vocals are the name of the game – which are what ground the song from being too saccharine. The moody yet uplifting “Beyond the Pale” has a bit of a slower pacing at the chorus that strikes a genuine chord, and closer “Dissonance” has a nice opening build up as well as a great melodic finish. The heavier aspects are where the metalcore connections feel clearer. Tracks like “Remove the Earth” and “The Willing Martyr” like to jump in with some driving verses and build up to a more emotive chorus. They feel a little familiar at times, but it’s performed so spot-on it’s really hard to knock them for it if you dig the style.

Fury by Failure is a fine introduction to Lightworker. One hopes that they dig even further into the more melodic elements (without abandoning all heavy ones of course), as it seems they have a real knack for providing a genuinely poignant touch to them. Considering all of the haphazard acts attempting this sort of style, Lightworker is already a bright spot.