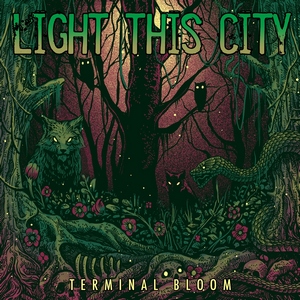 As the Gothenburg movement picked up speed and brought itself across the Atlantic waters to North America, it began to diversify itself. Of course, at the front and center of that was the metalcore scene which took the music into a much more poppy area. But there were bands on the outskirts that never seemed to really connect with a larger audience who dared to take things in a different direction. Light this City was one of those perpetually underrated bands that grew with each release but never reached the level of some of their peers.

Ten years removed from their last album (and arguably their peak), Light this City return with a new offering in Terminal Bloom. There’s always the question of how a reformed act will fit in with today’s trends and scene, and thankfully Light this City come back in a way that’s true to their form and conjures the feelings of what makes melodic death metal such an energetic and passionate genre to start. Not that the band is 100% melodeath, but the band’s love of acts such as At the Gates, Carcass, and Arch Enemy still shine through, along with a solid helping of American thrash and a splash of punk. Basically, it’s a high-octane formula that can be throttling in tempo without forgetting to toss in those delightful Scandinavian melodies that harken back to the genre’s golden age. The galloping thrash riffs (sometimes accompanied by intense drum blasts) prime the listener and always hit the mark by getting the head banging in full fury. A track like “The Wake of My Will” is constantly driving, and the little melodic flirtations that you can pick up on are the icing on top of the cake, complete with a scorching solo. Vocalist Lauren Nichol is the final piece to the puzzle, with caustic, emotive screams that are surprisingly intelligible for their delivery (not to mention the solid lyrical content).

Terminal Bloom, much like the Light this City albums before it, is a case of concise and precision attacks when it comes to songwriting. Everything described above about the act is accomplished in a 3-4 minute window (though “Extinguished” is a real barnburner at 2:21) – these are songs that have been stripped to their essence, and none of the fat remains. It creates a visceral listen, but one that is so chock-full of standout melodies that you can listen to it in its entirety a solid three times in a row without concern (as this scribe did). The only moment things let up is a short, and well placed acoustic piece in “Death Downward,” which feels like a deserved rest (not to mention the focus on some peaceful melodies).

An exceptional return from one of American metal’s top underdogs, perhaps 2018 will give Light this City the praise they have deserved. This is uncompromising, breakneck melodic death/thrash that consistently delivers memorable guitar heroics and triumphant melodies alongside visceral carnage. Terminal Bloom is a winner.

Light this City – In Bloom