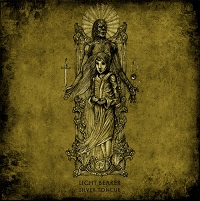 The post-metal heyday has long since passed but that doesn’t stop the outflow of bands producing serviceable, even spectacular, albums in the style. For British purveyors Light Bearer they fall closer to the serviceable side of the spectrum on Silver Tongue but nevertheless there is enjoyment to be found across its epic-sized and sprawling indulgences.

Succinct is something the band cannot be accused of being, the four tracks that make up Light Bearer (at least in the form received) each bordering over or around 20 minutes, slowburning and multi-part engagements that are intended to be listened to when ample time can be given to the slow trickle of details and unveiling of layers.

The idea of approaching these tracks individually is a fruitless one, for casual looks at random points can reveal a kind of sameyness that’s a downside of post-metal in general, but especially so in tracks of this kind of girth. The central concept tying this album to previous releases by the band is an intriguing and elaborate one, best left unspoiled and enjoyed in classic album fashion, by candlelight in the dark of night.