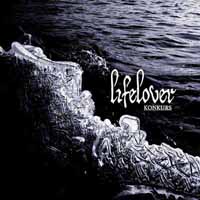 In the realm of what is avant-garde and is truly avant-garde, Sweden’s Lifelover fall easily into the second category. If the litmus test is anything beyond Into the Pandemonium, then Konkurs (which was originally released in 2008), holds its own. There’s no real anchor to this thing; rather a conscious stream of dark, adventurous tones that range from necro black metal, Goth metal, and everything in between.

If there was a common ground or thread to Konkurs, it probably would be rooted somewhere in the dense, desolate atmosphere that the likes of early Katatonia, Anathema, and Paradise Lost ushered in, as well as pre-pop-era The Cure (think Pornography, maybe The Top). Granted, this is not straight doom metal per se (or like The Cure); it’s evident in the cold, wintry vibe that practically all of these 14 songs put out. There are even traces of shoe-gaze going on during “Stängt PGA Semester,” as well as disturbing black metal shrieks on “Mental Central Dialog.”

Additional highlights include the desperate strumming and humming of “Cancertid” (love the dungeon-sounding guitar solo) and “Alltid-Aldrig,” which may be the best song of the bunch, as well as “Twitch,” a song that brings new meaning to the term “anguished.” A concerted black metal edge evolves as the album progressing, culminating in album closer “Spiken I Kistan,” a song that doesn’t fall too far from the early 90’s Norwegian black metal tree.

Right in the wheelhouse of those are charmed by the grandiose movements of early black and Goth metal, Lifelover is the direct line to the very small number of bands that are truly avant-garde. It all begins and ends with Celtic Frost, but if Lifelover’s upcoming output comes close to Konkurs, many will start tosing a different tune. Utterly deranged stuff, and we mean that with the utmost reverence.