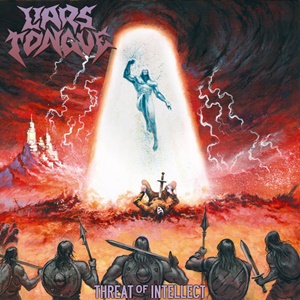 Labels at this point when it comes to music can be quite difficult. What’s crossover thrash to one person could be metallic hardcore to another – never mind the straight-ahead versions of each. Which could be to the benefit of Liar’s Tongue – another discovery through social media, as this four-piece embrace a primal approach to their performances and songwriting on their debut album Threat of Intellect. Throwback elements are assuredly present, and yet they aren’t the prototypical Bay Area heroes but instead a wider swath of hardcore, thrash, and even death influences to create quite a swirling mass of sonic hooks and irresistible grooves.

Feeling more at home in that lurching, mid-tempo to slightly slower riff/tempo mold that could be comparable to say the Cro-Mags or possibly a faster Crowbar, songs like “Conquer and Control” and “Another Face” lock into sequences of chord progressions and slamming rhythm section work that propel bodies left, right, and aerial – you’d be hard pressed to not see walls of death or unison fist waving to these cuts. Power Trip is probably a current, fair band comparison in spots- although the lead play does have seasoned textures plus proper fluidity – and guitar-wise Tyler Statler will even throw in some girth in his rhythms, most evident on highlight “Mindless Majority”. True hardcore buildups and breakdowns occur organically, often riding out a part and then shifting down gear into a half-time or quarter speed tempo that mandates body movement of some sort, and setting the stage for the vicious lower register vocal presence of Brian Miya.

Rare is the day that you hear someone using the methodical, rhythmic cadence that put John Tardy from Obituary into the death classic that he is into a crossover metal/hardcore band, but that’s what you will get from Brian here. He’s chosen to be a little clearer even through the delay/reverb elements, but his delivery on “Eclipse of Justice” right through to “Power Struggle (Rise/Fall)” serves notice that Liar’s Tongue mean business. Capping this off with battle-tested Andrei Bouzikov cover art plus lyrical content that speaks to the social/political/personal upheavals in an intelligent, informed manner and you have a tight, compact recording (clocking in just under thirty minutes) that should gain decent traction for the band. The underground is still alive and well, Threat of Intellect providing ample proof to await more Liar’s Tongue material down the line.